There is a paradox in Saint Maud, the first feature from writer/director Rose Glass. Although it constantly, closely tracks its central character Maud (Morfydd Clark), and restricts itself to her point of view right up until its very final image, the film is dominated by dialectics. Young Maud’s status as a private live-in nurse affords her plenty of opportunity to converse with her 49-year-old patient Amanda (Jennifer Ehle).

As a Christian convert, Maud is in constant dialogue with her past secular self (who even had a different name), and with the relatively recent traumatic experience that led to her acquisition of faith. The voiceover narration from Maud which regularly punctuates the film’s events may have the function of an interior monologue, but it is formally presented as a conversation with God – a conversation that is only at first one-way.

Every psychodrama requires a primal scene. Saint Maud’s is first shown at the beginning with impressionistic abstraction – a supine long-haired woman dripping blood from her hospital stretcher, Maud curled up into a corner in her medical scrubs with literal blood on her hands, and a large beetle scuttling across the ceiling above – and is later reconstituted in increasingly hallucinatory versions. 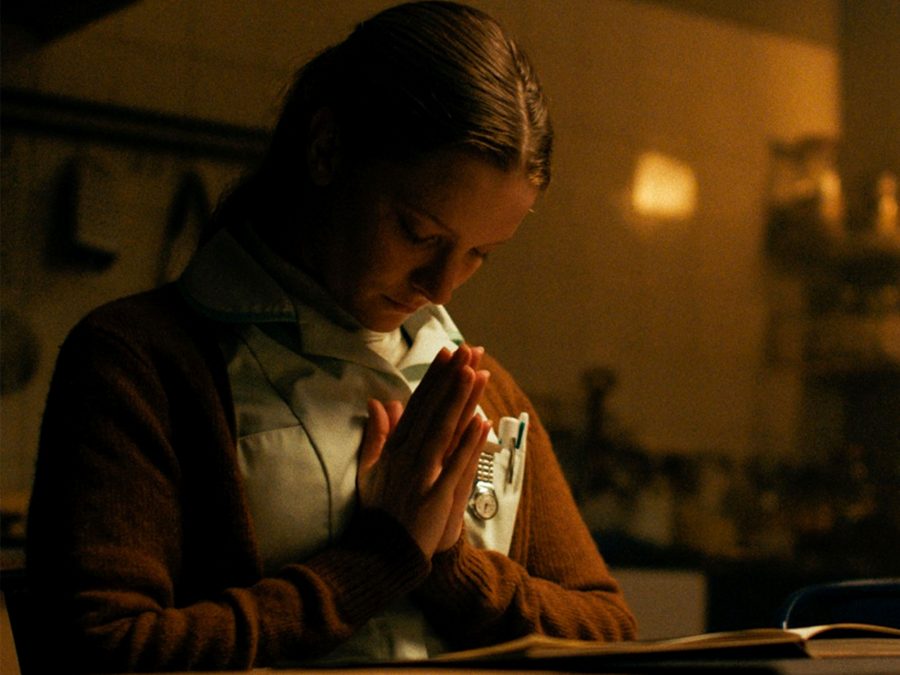 A former dancer, choreographer and woman of the world, Amanda is amused by her primly ascetic carer, and whether because her stage four lymphoma has her suddenly entertaining spiritual matters, or perhaps just because she is bored, Amanda indulges Maud’s claims about having a direct line to the divine. Maud sees in Amanda a chance to redeem, even exalt, herself by saving another’s soul – and though she may repress and deny it, the love she feels for her patient is more than just godly.

In this fraught mix of lust, devotion and delusion, it is clear that the self– tormenting Maud is going to crack – but even as we see the fissures starting to form, and hear the (Welsh) voice of God instructing His lost lamb in the path to salvation, the film generates unbearable tension both from our uncertainty as to what Maud might do, and from our conflicted feelings towards a figure who is at once sympathetic victim and manipulative menace.

In the exchanges between these two very different women, and between their opposing, only occasionally intersecting ideologies of faith and secularism, Glass offers the binary perspectives that drive the film. For while Ben Fordesman’s camera reels and sways to Maud’s out-of-step rhythms, and takes us on a canted trip through her distorted spin on reality, the earthier Amanda grounds everything, so that her absence coincides with Maud’s peaks of unravelling. All this takes place in coastal Scarborough, and the climactic sequence unfolds on the beach, a shifting strip where land and sea are in constant dialogue.

Ultimately, Maud herself will occupy a liminal space, whether stuck in the mundanity that others see, or transcending to a different plane, and whether elevated to a Blakean heaven or engulfed in a hell of her own making. Either way, it is an arresting close to a debut that grips from beginning to bitter end.